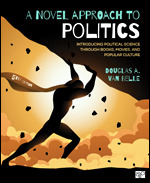 A Novel Approach to Politics turns conventional textbook wisdom on its head by using pop culture references to illustrate key concepts and cover recent political events. This is a textbook students want to read. Adopters of previous editions from schools all over the country are thanking author Douglas A. Van Belle for some of their best student evaluations to date.


With this Fifth Edition, Van Belle brings the book fully up to date with recent events such as Trump’s executive orders on immigration, the 2016 elections in the US, current policy debates including recent court decisions that may affect gerrymandering, international happenings such as Brexit, and other assorted intergalactic matters. Van Belle adds a wealth of new and recent movies and books to the text as he illustrates key concepts in political science through examples that captivate students. Employing a wide range of references from 1984 to Game of Thrones to House of Cards, students are given a solid foundation in institutions, ideology, and economics. To keep things grounded, the textbook nuts and bolts are still there to aid students, including chapter objectives, chapter summaries, bolded key terms, and discussion questions.

Give your students the SAGE edge!

SAGE edge offers a robust online environment featuring an impressive array of free tools and resources for review, study, and further exploration, keeping both instructors and students on the cutting edge of teaching and learning. Learn more at edge.sagepub.com/vanbelle5e.

Chapter 1: Introducing the Ancient Debate: The Ideal Versus the Real
Classical Theory, Modern Reality, and Stuff
You’re Just a Mime Trapped in an Invisible Box
Fiction as a Tool for Exploring Politics
Utopias in Fiction and Politics
Ideologies
What Is Politics?
What Is Political Science?
Chapter 2: Why Government? Security, Anarchy, and Some Basic Group Dynamics
Security Trumps Anarchy, Rock Smashes Scissors, But Will Someone Please Explain How Paper Beats Rock?
A Model for the Emergence of Cooperation: Bobsville
Collective Action
Security
Power
Anarchy
The Context of Hierarchy
Alliances
Groups and Group Identities
Chapter 3: Governing Society: We Know Who You Are
Leadership Benefits
The Panopticon
Collective Action, Revolution, and the Use of Force
Legitimacy and Government Control
Chapter 4: Government’s Role in the Economy: The Offer You Can’t Refuse
Government All Up In Your Business, Yo
The Tragedy of the Commons
Karl Marx—Student of Capitalism?
Socialism
The Yin and Yang of Capitalism and Socialism
Modern Stuff
Conclusionoscopy
Chapter 5: Structures and Institutions
Structures or Institutions?
Human Nature and Political Institutions
The Reality of Political Institutions
Civilization
Chapter 6: El Grande Loco Casa Blanca: The Executive (in Bad Spanish)
Oh Captain, My Captain
The Scorpion King on Grandpa’s Farm
Kings and Presidents
The Democratic Executive
Chapter 7: The Confederacy of Dunces: The Legislative Function (Not in Bad Spanish)
Boring History Stuff
A Dreary Discussion of Democratic Legislatures
A Redundant Repetition of the Theme: Contrasting Legislatures in Parliamentary and Presidential Systems
A Tired Attempt to Make Coalition Politics Interesting with a Lame Example
A Dreary Bleakness in the Authoritarian Gloom: They Endure Legislative Institutions, Too
Chapter 8: Brazilian Bureaucracy: Do I Even Need to Bother with the Jokes?
Bureaucracy, It Goes to Eleven
So ... What Is a Bureaucracy?
There Be Flaws in Yonder Bureaucracy, Obviously
Chapter 9: Courts and Law: Politics behind the Gavel, Obviously, but What’s under the Gown?
Law and Politics
The Political Functions of Courts
Trial and Appellate Courts
Legal Systems
Jurisprudence
Types of Law
Constitutional Review
Chapter 10: Not Quite Right, but Still Good: The Democratic Ideal in Modern Politics
Arrow’s Theorem
Democracy and the Liberal Ideal
An Economic Theory of Democracy
The Real versus the Ideal, Again
Chapter 11: Media, Politics, and Government: Talking Heads Are Better Than None
Reality and Beyond
The Whole China Charade
Your New Brain and the Creation of Reality
News Media and Politics
A Vast Conspiracy?
Understanding the Distortions Is the Key
Chapter 12: International Politics: Apocalypse Now and Then
Causes of War
Back to Anarchy
World War I Was Unpleasant
Realism and War
Challenging the Realist Paradigm
Chapter 13: Secret Government: Spies, Lies, and Freedom Fries
Chapter 14: Political Culture: Sex and Agriculture, Getting Rucked Explains It All
Political Culture
Applying Political Culture
Back to the Question of “What Is Culture?”
Chapter 15: The Lastest and Bestest Chapter: The Study of Politics
Here’s Where the Story Ends
The Study of Politics
The Applied Subfields
Conclusion

SAGE edge for Instructors, supports your teaching by making it easy to integrate quality content and create a rich learning environment for students.

SAGE edge for Students provides a personalized approach to help students accomplish their coursework goals in an easy-to-use learning environment.

“A Novel Approach to Politics is an easy-to-read, entertaining, basic introduction to political science that covers the key concepts, theories, and thinkers of the discipline with relatable examples and illustrations from fiction and pop culture. Van Belle’s humor sets his text apart, making learning about political science ’cool‘ and ’entertaining‘ for the nerdy and non-nerdy alike.”

“A Novel Approach to Politics is highly readable and engaging for students! This is a text that will draw students into topics that they previously rolled their eyes at.  Seriously, students will actually not only read the book, but also be able to personally relate to the material. In 25 years of teaching political science, I’ve never found a better textbook!”

“Who says political science has to be dull and lifeless? Van Belle’s textbook is completely distinctive from the other currently available political science textbooks— you will come for the popular culture references and stay for the humor, which both work as engaging ways to keep students’ attention. My students invariably love this book. A Novel Approach to Politics is political science as you always hoped it would be.”

Douglas Van Bell’s A Novel Approach to Politics is a “useful and handy textbook for…beginners” with “good examples” and “simple definitions.”

“Van Belle offers us an introduction to the study of politics using popular culture and humor. While this approach is already enshrined in the numerous articles and teaching conferences in our discipline, it has yet to be reflected in any meaningful way in a textbook— with Van Belle’s text as the exception, of course!”

“A Novel Approach to Politics is an entertaining textbook that combines solid scholarship with references to cultural media that students will enjoy and teachers will find refreshing. Van Belle’s text is very different from traditional textbooks— it is like The Daily Show compared to CNN News. Its sarcasm and humor are unique and make students more likely to read it than traditional texts.”