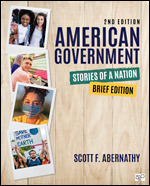 In the Second Edition of American Government: Stories of a Nation, Brief Edition, author Scott Abernathy tunes in to the voices of America’s people, showing how diverse ideas throughout our nation’s history have shaped our political institutions, our identities, the way we participate and behave, the laws we live by, and the challenges we face. His storytelling approach brings the core concepts of government to life, making them meaningful and memorable, and allows all students to see themselves reflected in the pages.

Carefully condensed from the full version by Scott Abernathy, American Government, Brief Edition, gives your students all the information they need—and the stories they relate to—in a more concise, value-oriented package.

This title is accompanied by a complete teaching and learning package. Contact your SAGE representative to request a demo.

Preface
Acknowledgments
About the Author
PART I: FOUNDATIONS
Chapter 1. American Political Stories: Claiming Rights, Demanding to Be Heard
Standing Rock: Water Protectors Claim Their Rights and Freedoms in North Dakota
American Political Culture Is Built on a Set of Shared Ideas
Politics and Political Action Set the Stage for Revolution
The Structure of Institutions Affects How Citizens Participate
Conclusion: The American Experiment Continues, and You Are Part of It
Chapter 2. The Constitution of the United States: A New Vision of Representative Government
James Madison Plans for a Republic That Will Last
The Confederal System Makes Coordination between the States Difficult
Delegates Reach a Compromise at the Constitutional Convention
Delegates Work Out Details of the New Government
Federalists and Anti-Federalists Argue over Ratification
Conclusion: The Motives of the Framers and the Effects of the Constitution Are Still Being Debated
Chapter 3. Federalism: The Changing Boundaries between the Nation and the States
Marijuana Policy Today Reveals Tensions between State and Federal Law
The Constitution Divides Power between the Nation and the States
For Much of American History, the Boundaries between the Nation and the States Were Sharper Than They Are Today
President Franklin Roosevelt’s Response to the Great Depression Reshapes American Federalism
Modern American Federalism Remains Cooperative but Faces Challenges
Conclusion: The Evolution of Federalism Continues
Chapter 4. Civil Liberties: Building and Defending Fences
Cell Phone Tracking Capability Challenges the Boundary between Public and Private
The Bill of Rights Establishes Protections for Americans’ Civil Liberties
The First Amendment’s First Two Protections Both Involve Religion
The First Amendment Also Protects Expression: Speech, Press, Assembly, and Petitioning the Government
The Constitution Also Protects Individuals Involved with the Criminal Justice System
The Ninth and Tenth Amendments Help Shape Freedoms in the Nation and Across the States
Conclusion: Civil Liberties Involve Fences Still under Construction
Chapter 5. Civil Rights: How Equal Is Equal?
Protesters Act to Secure Rights for Americans with Disabilities
Civil Rights Amendments Emerge from the Civil War—but Provide Limited Protection in Practice
Challenges to Legal Segregation Achieve Successes But Face Resistance
American Women Work to Secure Their Civil Rights
Americans Confront Overlapping Forms of Discrimination
Conclusion: Have Americans’ Civil Rights Been Secured?
PART II: POLITICAL BEHAVIOR AND MASS POLITICS
Chapter 6. Public Opinion: How Are Americans’ Voices Measured, and Do They Matter?
Public Opinion May Be Moved by Important Events Like Ferguson
Public Opinion Is The Sum Total of Individual Beliefs and Attitudes
Public Opinion Is Transmitted and Measured in Several Ways
Political Socialization and Political Ideology Shape Public Opinion
Ferguson and the Effects of Public Opinion on Democratic Representation
Conclusion: How Meaningful Is Public Opinion?
Chapter 7. The Media: Truth, Trust, and Power
Can a Foreign Government Use the American Media to Influence a Presidential Election?
The Evolution of American Media Shows That Issues of Power and Trustworthiness Are Not New
Questions of Bias Challenge Americans’ Trust in the Media’s Objectivity
Media Ownership and Content Are Subject to Regulation
The Power of the Media to Affect the Public Is Tested
Conclusion: Debates about the Power of the Media Continue
Chapter 8. Parties, Elections, and Participation: Making Representative Democracy Happen
Bernie Sanders Challenges the Democratic Party to Become More Progressive, Twice
Parties Act to Identify, Support, and Nominate Candidates for Elected Office
The Rules Governing National Elections Shape the Transmission of Americans’ Preferences Into Laws and Policies
Political Participation Can Take Many Forms
Conclusion: The 2020 Elections
Chapter 9. Interest Groups and Social Movements: Collective Action, Power, and Representation
A Housing Bubble Bursts, and Interest Groups Pop Up
Americans Face Challenges in Acting Collectively in a Representative Democracy
Interest Groups Vary By Type and Tactic
Occupy Wall Street Illustrates the Struggles, Successes, and Failures of Social Movements
Social Movements Employ Different Tactics from Interest Groups to Make Change and Educate
Conclusion: Organizing in American Political Life
PART III: INSTITUTIONS
Chapter 10. Congress: Representation, Organization, and Legislation
Two “Years of the Women” Highlight the Promise and Challenge of More Inclusive Representation in Congress
The Constitution Defines Congress’s Shape and Powers
Congress Is Organized Around Formal and Informal Rules
The Legislative Process is Complex by Design
Members Represent Constituents in How They Act and Who They Are
Conclusion: The Complexity of Representation
Chapter 11. The American Presidency: Individuals, Institutions, and Power
In This Corner . . . Donald J. Trump: The President as Prizefighter-In-Chief
The Constitution Outlines the Powers of the American Presidency and Places Limits on Those Powers
Institutions and Other Informal Sources of Power Shape the Modern Executive Branch
Presidents Have Pushed the Limits of Their Power to Preserve National Security
The President Has Several Tools for Unilateral Action
Conclusion: The Paradoxes of Power Continue
Chapter 12. The Federal Bureaucracy: Putting the Nation’s Laws into Effect
Federal Bureaucratic Action Consists of Many Actors and Evolves Over Time
Theories of Bureaucratic Organization Focus on Rules, People, and Tasks
The Bureaucracy Has Developed in Response to Demands and Crises
A Functioning Bureaucracy Depends upon Effective Organization
The Bureaucracy Is Constrained by Oversight and Reform
Conclusion: What Does a “Good” Bureaucracy Look Like?
Chapter 13. The Federal Judiciary: Politics, Power, and the “Least Dangerous” Branch
The Politics of Supreme Court Confirmations Place Nominees on “Trial”
The Constitution Casts the Judiciary as a Unique but Weaker Branch
The “Trial” of John Marshall Establishes the Principle of Judicial Review
The American Legal System Is Defined by Federalism
Judicial Review Raises Questions of Constitutional Interpretation and Judicial Decision Making
Conclusion: The Trial of the Supreme Court Continues
PART IV: POLICY
Chapter 14. Public Policy: Promoting the General Welfare and Advancing Americans’ Interests
American Dreamers’ Futures Depend upon Whether a Public Policy Will Continue
American Health Care Policy Has Evolved Significantly since the Great Society
Fiscal Policy Guides the Economy and Responds to Crises
U.s. Foreign Policy Has Changed with the Nation’s Place in Global Affairs
Immigration Connects Foreign Policy to Domestic Policy
Conclusion: The Story of American Politics Continues
Appendices
Glossary
Notes
Index

The open-access Student Study Site makes it easy for students to maximize their study time, anywhere, anytime. It offers flashcards that strengthen understanding of key terms and concepts, as well as learning objectives that reinforce the most important material.
Student Study Site
edge.sagepub.com/abernathybrief2e

I have chosen a shorter, cheaper book by one of your authors.

Chapter 2. The Constitution of the United States