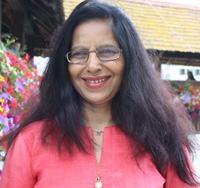 Anjali Gera Roy is a Professor of English in the Department of Humanities and Social Sciences at the Indian Institute of Technology (IIT) Kharagpur, West Bengal, India. She has carried out extensive research on various aspects of Bollywood, as part of a Senior Research Fellowship of the Indo-Canadian Shastri Institute in 2007, as well as on Bollywood’s transnational flows at the Asia Research Institute National University of Singapore in 2008–2009.

She has published essays in literary, film, and cultural studies and has also authored and edited several books. She has co-edited with Nandi Bhatia a volume of essays, Partitioned Lives: Narratives of Home,

Displacement and Resettlement (2008), on the Indian Partition of 1947; and with Chua Beng Huat another volume Travels of Bollywood Cinema: From Bombay to LA (2012). Her book on Bhangra’s global flows, Bhangra Moves: From Ludhiana to London and Beyond was published in 2010.

The Magic of Bollywood