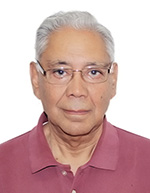 Avinash Kirpal graduated from the University of Oxford in 1962 and then worked at the Tata Administrative Service for about 30 years at various positions including Public Affairs Officer for the Tata group in New Delhi, Corporate Planning Manager for Tata Exports Ltd and Vice-President of Tata International Ltd. Later, he became Secretary General of the World Federation of Trading Associations in Montréal.

His writings include The SME and the Export Development Company, published by the International Trade Centre, Geneva, and translated into French and Spanish, of which he is the co-author, as well as articles published in management journals and magazines.

His hobbies include travel—he has travelled to more than 60 countries for work and leisure—as well as watching old classic movies.