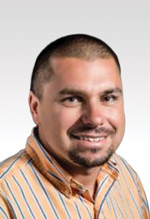 Basil Conway IV is currently an Assistant Professor of Mathematics Education in the College of Education and Health Professions at Columbus State University and serves as the mathematics education graduate program director. He serves on numerous doctoral committees as both a chair and methodologist. He earned his B.S., M.S., and PhD. from Auburn University in mathematics education in 2005, 2012, and 2015 respectively. He also completed his M.S. in statistical science from Colorado State University in 2010.

Basil previously spent 10 years teaching in public middle and high schools before he became a teacher educator. During this time, he also worked as an instructor at a local junior college. Over the past 15 years of service in teaching mathematics and future teachers of mathematics he has served in various local mathematics education leadership positions and organizations including Transforming East Alabama Mathematics (TEAM-Math), Auburn University’s Teacher Leader Academy, East Alabama Council for Teachers of Mathematics, Woodrow Wilson Fellow, National Mathematics and Science Initiative, and A+ College Ready. His recent works on teaching mathematics for social justice have been published in NCTM’s Access and Equity: Promoting High-Quality Mathematics in Grades 9–12 (2018) and Handbook of Research on Critical Thinking Strategies in Pre-Service Learning Environments (2019).

Basil’s lens for teaching and student learning draw heavily from Vygotsky’s theory of social constructivism in which language and culture play essential roles in human’s intellectual development. Thus, he believes the co-construction of knowledge is paramount in the development of students social and mathematical identities. He believes teachers, parents, other students, cultural norms, and other cultural communicative devices play a critical role in shaping students’ knowledge of society and mathematics. His research has specifically focused on the development of statistical reasoning and social awareness in social constructivist learning environments.