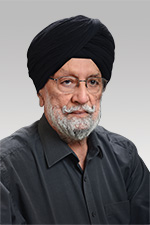 Inderjit Singh Jaijee is well known in Punjab for his work to ensure education for rural children whose fathers have committed suicide as well as for his advocacy of civil rights and human rights. In the course of this work, he has been arrested 17 times and imprisoned five times. He remains active in this cause. The organizations with which he is associated—the Baba Nanak Educational Society and the Movement Against State Repression—are both scrupulously apolitical and non-sectarian.

Until 1983, he was a marketing executive for Dunlop India Ltd. In that year, as the situation in Punjab deteriorated, he took voluntary retirement and returned to Punjab. He was elected to the Punjab Vidhan Sabha on the Akali ticket in 1985, but he resigned in 1986 in a protest against government actions at the Golden Temple.
The Legacy of Militancy in Punjab