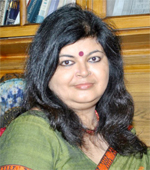 Indrani Raimedhi is a journalist, a columnist, and an author. She won the Kunjabala Devi Award for Investigative Reporting on women issues in 2004. She is at present Feature Editor with the Assam Tribune daily (established 1939) and was recruited as the first woman journalist in the editorial department in 1989.

Author of nine books, Raimedhi’s four anthologies of short stories include The Season Coming, The Concubine’s Room, The Night Journey, and The Stranger’s Touch. Her books for children have been used in schools as rapid readers. Her poetry and short fiction have been published in national magazines as well as in Austria and The Netherlands. Raimedhi has been Resource Person at IGNOUs Phone-in-Creative Writing Program in All India Radio, Guwahati. Several of her stories have been translated and also made into television serials.

She has researched and anchored a six-part series on Assam’s greatest living writers. She has visited Germany, Belgium, and UK as a delegate of an AINEF—European Union Gender Project. At present she is giving the finishing touches to another anthology of short fictions titled A Season of Waiting.

My Half of the Sky