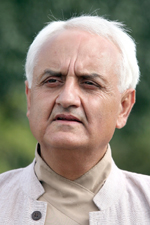 Kanak Mani Dixit, writer and activist, was educated in Nepal, India and the USA. He is the founding editor (1987 to the present) of Himal Southasian, a highquality, independent, monthly journal that offers informed critical commentary on social and cultural issues.

Alongside the journal, Dixit plays an influential role in a wide variety of cultural disciplines. He founded the Film South Asia (FSA), a documentary festival, which has become an important platform for local creativity, stimulating innovative local filmmaking on topics such as gender, child labour and water scarcity. Dixit also organises public lecture series and conferences involving regional and international speakers—including, recently, a Cartoon Congress incorporating a Southasian cartoon competition. He promotes research, writes children’s books and co-owns a publishing house that disseminates books and translations of great value to Nepali society. He is the author of Peace Politics of Nepal: An Opinion from Within published by Himal Books in 2011. He was one of the cofounders of the post-2005 Civil Society Platform, plays a key role in the prodemocracy campaign, challenges repression and promotes freedom of expression. Among other awards, he was awarded the Prince Claus Award in 2009.