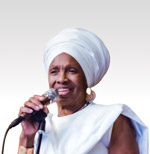 Krishna Kaur. When California and several other states passed the Three Strikes Law in 1994, being a Black woman in the US, I knew that it meant that many men and women of color, especially Black men and women, would be corralled in prisons even for something as simple as stealing a candy bar if it was their 3rd strike. I also knew that our prisons were up for sale around the same time and that lots of money could be made from owning a prison. The two situations, the 3 strikes law, and the privatization of many of our maximum prisons, were a match made in heaven. These two possibilities sparked in me the determination to do everything possible to help prevent our youngsters from getting that 3rd strike. It was then that Y.O.G.A. for Youth was born.

I was initially called to teach high school youth in a program called, “Upward Bound.” These low-income youth had strong desires to go to college but were not being exposed to the kind of education from their low income schools that could support that vision to become a reality. I taught Kundalini Yoga to a group of inner-city youth in collaboration with Upward Bound for four summers. These youngsters, boys and girls, black and white, were being housed on a beautiful university campus learning higher math, college level sciences, and other college prep courses. That hope filled program ended unceremoniously when our government passed what was called the “No Child Left Behind” law that in reality, left millions of young Black and Brown boys and girls behind. They were devastated. We were frustrated. I then received a call from the director of a Juvenile Detention Center for incarcerated boys. That is when it became obvious that I needed to create a YFY Teacher Training program. What was easy for me was not easy for many who wanted to help make a difference in the lives of our youth.

Training yoga teachers in the most effective ways to engage teens and pre-teens in the art and science of yoga and meditation was critical to the success of our organization. The trainings grew from 9-hour trainings to 40 hours, where it has been for over 20 years. The increase in hours for the training was imperative as the need for our teachers to understand more deeply the issues surrounding trauma, anxiety, and fear grew in intensity. These triggers to youth’s behaviors are chronic in our inner-city schools and homes today. Our teachers have to be able to identify and respond effectively to the questions we are given on the spot by these youngsters. At the same time, it is precisely the yoga and mindful self-help techniques that empower them and give them hope and a belief in themselves that changes their lives going forward. It wasn’t long before I began receiving calls from places I never expected. It was eye opening to realize that young Black and Latino kids were not the only ones who needed what we were teaching.  The Y.O.G.A. for Youth training has been taught around the world, throughout Europe, Brazil, Chile, Germany, the UK, Mexico, China and extensively throughout the United States and North America. Our children are everywhere and need these teachings to help them navigate through a very complicated world. Right now, there is very little else that makes sense to them.

During the past year, under COVID, Y.O.G.A. for YOUTH has served elementary and middle schools via Zoom in Los Angeles, North Carolina, and Montgomery County Schools in Maryland. These conditions are far from the best environments for youngsters at home trying to focus while siblings, pets, and other distractions prevail. Yet, in our experience they enthusiastically engage for short periods of time as the memory of how they felt after the yoga classes at school is something they want to experience again and again. They say it helps them sleep a night. That might sound like a small thing, but when you haven’t slept for 3 days, it can totally distort the way even the simplest of challenges can trigger irrational thinking and undesirable behavior. There is a learning curve for sure, yet, when it comes to our children, Y.O.G.A. for YOUTH wants each child to affirm their own greatness. That is more important than anything to us.

Cultivating Happiness, Resilience, and Well-Being Through Meditation, Mindfulness, and Movement