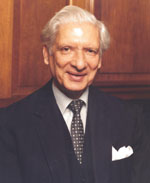 Maharajakrishna Rasgotra was India’s Foreign Secretary from 1982 to 1985. In a long career in India’s Foreign Service which ended in 1990, he filled several high posts in India and abroad with distinction. His ambassadorial career from 1967 to 1990 took him to Morocco and Tunisia, the USA, the UK, Nepal, the Netherlands, France and UNESCO and finally, again, to the UK as India’s High Commissioner. His tenure as Foreign Secretary from 1982 to 1985 was marked by a renewal in Indo-American relations, sustained negotiations with Pakistan and an opening to China.

After retirement from government service, Mr Rasgotra was Honorary Visiting Professor at the Jawaharlal Nehru University, Regent’s Professor at the University of California, Los Angeles, President of the Delhi College of Arts and Commerce, member of the UN’s Disarmament Advisory Council and Chairman of government of India’s National Security Advisory Board.

Science and Technology in China
The New Asian Power Dynamic