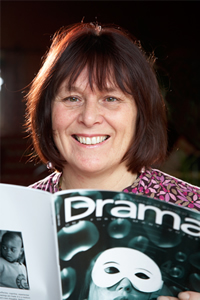 Patrice Baldwin is President of the International Drama Theatre and Education Association (IDEA) from 2010 - 2013 and an Executive Member of the World Alliance for Arts Education (WAAE). She is also the Chair of National Drama, the UK leading association of drama and theatre educators. From April 2000 to June 2011 she was the local authority arts adviser for Norfolk County Council Children's Services but decided to go freelance in June 2011 to enable her to devote more time to working and travelling for IDEA and to developing 'Drama for Learning' in the UK. Patrice was a primary school headteacher for eleven years and still works in schools on a consultancy basis for drama for learning, cultural and creative learning, primary curriculum development, Artsmark and school improvement. She was an Ofsted inspector and a School Improvement Partner. For several years she worked as a BBC series consultant and scriptwriter for Let's Make a Story and wrote scripts for First Steps in Drama and stories and dramatisations for Together, a BBC radio assembly programme stories for primary schools.
The Primary Drama Handbook