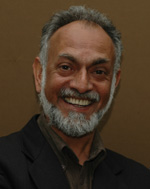 Ram Narayan Kumar was an Independent Political Activist and Thinker

The late Ram Narayan Kumar (1956–2009) was an independent political activist and thinker, based out of Delhi and Kathmandu.

He authored half a dozen books: three major works on Punjab (mainly ‘The Sikh Struggle’ and ‘Reduced to Ashes’), a mid-life political autobiography (‘Confronting the Hindu Sphinx’), and a volume on human rights studies. He also wrote numerous pamphlets, situation reports, and newspaper columns. He also led courses on Human Rights at SAFHR (an NGO with headquarters in Delhi and Kathmandu) for participants from all over South Asia.

Kumar’s work was close to completion when he succumbed to a sudden heart attack, in June 2009, in Kathmandu. His relatives and closest collaborators then decided to entrust Professor Jean Ecalle, a long-time friend of Kumar’s (who had closely followed the book project and regularly discussed Middle Eastern politics with the author) with the task of putting the final touches to the manuscript.

Professor Ecalle has written the foreword to the book and also has provided a much-needed Afterword.