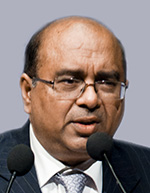 V. Eshwar Anand was a senior Editor with an academic bent of mind. He did his BA (honours with distinction) from Rayagada Autonomous College, Odisha, and MA, MPhil and PhD in political science from Berhampur University with a fellowship from the American Studies Research Centre, Hyderabad.

He held senior editorial positions in the Indian Express, Deccan Herald (both Bengaluru) and the Tribune (Chandigarh). Before joining the Indian Express in 1987 and as a research scholar, Dr Anand contributed Edit Page articles in the Statesman and Hindustan Times.

He was a specialist in public administration and constitutional law with primary focus on legislature, executive and judiciary. He also wrote on media laws, ethics and communication, integrity institutions, public policy and governance, electoral reforms and development administration.
He was associated with programmes organised by top institutions such as the Supreme Court of India, the Election Commission of India, the Central Information Commission, the Second Administrative Reforms Commission and prominent NGOs such as the Association for Democratic Reforms and the National Election Watch.

He was Professor of Journalism and Media Studies at Symbiosis Institute of Media and Communication (SIMC), Symbiosis International University (SIU), Pune, where he taught editing and reporting, media laws and ethics, development journalism, democracy and political parties, integrity institutions, constitutional law and elections.

As Member, Academic Council, and Board of Studies, Faculty of Media, Communication and Design, SIU, he was closely associated with the curriculum design and development of the university’s postgraduate department of journalism and mass communication. He guided a good number of PhD research scholars registered with SIU. He was also Member, Board of Examinations, SIU.

Dr Anand was a recipient of the National Education Award (India’s Best Professor Teaching Journalism and Mass Communication) for 2015 and 2016, and the Best Paper Award (Reforms and Best Practices) Honorable Mention at the Tenth International Conference on Public Administration held at the School of Political Science and Public Administration, University of Electronic Science and Technology of China, Chengdu, in October 2014. He also received New Delhi’s India International Centre Award, the Olive I. Reddick (Senior) Prize and the Karpoor Chandra Kulish Award for Excellence in Print Journalism.
A Handbook of Journalism