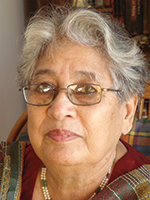 Humanist by faith, sociologist by profession, feminist by conviction, Zarina Bhatty was brought up in burka (seclusion) in a traditional Muslim family in Lucknow in pre-Partition India. She is the former President of Indian Association for Women's Studies (IAWS) and of Young Women’s Christian Association (YWCA), New Delhi. She has researched, published, and lectured extensively in India and abroad on Indian Muslim Women’s issues and on women in the unorganized sector. Her pioneering study on women in the bidi industry, undertaken and published by the International Labour Organization (ILO), received considerable recognition. Zarina Bhatty studied sociology and political science at the London School of Economics and taught at the University of Delhi. She later worked as Gender Specialist with United States Agency for International Development (USAID), International Fund for Agricultural Development (IFAD), and Islamic Development Bank (IDB). She is also the recipient of the Devi Awards 2015. After retiring from work, she has been living a quiet life in Mussoorie, Uttarakhand, India.
Purdah to Piccadilly