Book > Textbooks > Cognitive Psychology
SAGE online ordering services will be unavailable due to system maintenance on August 12th at 18:00 pm Pacific / 21:00 pm Eastern time. Thank you for your patience and we apologize for the inconvenience. 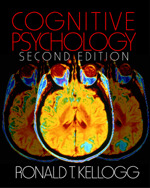 "This is a very thorough and complete text that is very well written. I was particularly impressed that the book incorporated and integrated the literatures on neuroscience and individual differences."

"Kellogg's textbook provides outstanding coverage of contemporary cognitive psychology. I especially welcomed chapters on Cognitive Neuroscience, providing neural underpinnings of cognition, and Intelligence. The latter topic is rarely included in books on cognition because the study of intelligence developed in a somewhat separate tradition from experimental cognitive psychology. Yet clearly intelligence should be considered as part of cognitive psychology, too. The coverage in the book is comprehensive and authoritative, but the chapters I read are also quite interesting and accessible. This book should be widely used as a text and a reference work."

As with his best-selling First Edition, Ronald T. Kellogg seeks to provide students with a synthesis of cognitive psychology at its best, encapsulating relevant background, theory, and research within each chapter. Understanding cognitive psychology now requires a deeper understanding of the brain than was true in the past. In his thoroughly revised Second Edition, the author highlights the tremendous contributions from the neurosciences, most notably neuroimaging, in recent years and approaches cognition in the context of both its development and its biological, bodily substrate.

Features of this text:

A new chapter on cognitive neuroscience at the beginning of the book, along with greater coverage of neuroscience throughout, highlights the enormous contributions from the neurosciences (particularly neuroimaging of the brain) during the last decade.

A new, full-chapter coverage on memory distortions highlights this topic with great interest value to students and strong practical implications in fields such as policing, law, and court proceedings.

Key terms and concepts are bolded in text and defined in margin notes for easy reference and each chapter concludes with a summary and list of key terms for student review.

Graphics have been expanded to visually support the text, and an expanded four-color insert highlights recent developments in neuroimaging.

An Instructor's Manual on CD-ROM is available to qualified adopters.

a very good book, quite in depth for level 3 but essential for university.

Excellent book. well laid out and enjoyable to read

excellent coverage of the broad domain of modern cognitive psychology. The chapter of cognitive neuroscience is particularly beneficial as it grounds the developmental elements of human cognition within the wider domain of neurological research which has been growing significantly over the last decades. This provides students with a comprehensive and authoritative coverage but not in a way that is inaccessible to students studying an undergraduate course in psychology.

Very good book for students at all levels

Handbook of Understanding and Measuring Intelligence