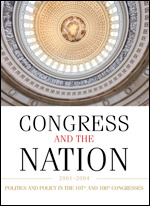 For over forty years, Congress and the Nation has been the signature resource for perspective and analysis of the U.S. Congress. It is the authoritative reference on Congressional trends, actions, and controversies.

The eleventh edition in this acclaimed series chronicles the political events during the first four years of the George W. Bush administration, covering the 107th and 108th Congresses. These four years are marked by some of the most significant, landscape changing events in American politics including the attacks of September 11, 2001 and the ensuing U.S. led invasions of Afghanistan and Iraq. Congress and the Nation XI: 2001-2004 addresses these topics and more, including:

Each chapter contains summaries of legislative activity, including bills passed, defeated, or postponed. An extensive appendix covers the four-year period.