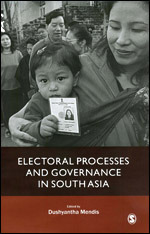 Share
Courses:
Government & Governance
December 2007 | 480 pages | SAGE Publications Pvt. Ltd
Download flyer
Most South Asian countries—following independence from British rule in the late nineteen forties, and in the case of Nepal, liberation from the autocracy of one family group in 1950—have enjoyed democratic systems of governance at least at some time or the other, often for extended periods of time, and, in a few cases, over the course of their post-independence history. Electoral processes have, however, been found wanting to greater or lesser extents in all these countries. Electoral malpractices are of critical concern to all South Asian countries.

The strength of the book lies in highlighting the political trends in relation to the electoral processes….the collation of articles is useful in understanding an important aspect of the democratic functioning of South Asian states. Some of the articles are rich in data and detailed discussion.

The book under review is a valuable medium to get first hand knowledge about the election processes, which are now prevalent in the sub-continent.