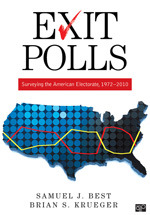 Every two years, exit polls become the most widely analyzed, written about, and discussed data-set in the United States. Although exit polls are known for their use in predicting elections, they are in fact the best tool for explaining election results. Exit polls are taken from actual voters, whereas pre-election polls that tally people’s intended votes tend to overstate the number of people who will actually go to the polls.

Exit Polls: Surveying the American Electorate is a groundbreaking new reference work that explores for the first time the trends in longitudinal variables asked in the national Election Day exit polls from their beginning in 1972 to the present. The book documents comparable survey items that have appeared in multiple exit polls over time. Authors Samuel J. Best and Brian S. Krueger—both election commentators for CBS news and statistical experts—present more than 100 tables and 100 figures showing the changes in the American electorate and its voting patterns over time. This work represents the first time exit poll data has been combined to show trends over time.

Chapter one: The Exit Poll Phenomenon provides a brief history of exit polls and chronicles how they evolved into their current arrangement. It explains how exit poll questions are developed, the sampling and weighting procedures used, the reporting protocols adopted, and the benefits and limitations of exit polls.

Chapter two: Creating and Using Exit Poll Time Series describes how individual exit polls were compiled into a first of its kind cumulative data file and discusses the rationale for selecting specific survey items. The chapter explains the techniques used to merge the data and discusses the framework used to present the data in the subsequent chapters.

Chapter four: The Presidential Voting Preferences of the Active Electorate examines the presidential voting patterns of the various groups that make up the American electorate, from 1972 to 2010.

Chapter five: The Congressional Voting Preferences of the Active Electorate examines the congressional voting patterns of the various groups that make up the American electorate from 1972 to 2010.

Offering unique insight into the American electorate, this important new work is meant to serve novice and expert researchers alike. Libraries with holdings in American politics and government will want to acquire this one-of-a-kind resource.

"Polling experts Best and Krueger's meticulous longitudinal study synthesizes oftentimes elusive and ephemeral exit poll statistics from disparate sources over the past four decades...readers will also profit from the first three chapters, which offer a history of exit polls, explain the authors' methodology, and discuss the changing demographic and ideological composition of the electorate."

An Introduction to Survey Research, Polling, and Data Analysis