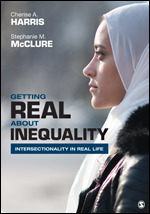 Share
Courses:
Introductory Sociology | Race, Class, Gender, & Sexuality | Race, Gender & Class in the United States | Social Inequalities/Social Stratification | Social Inequalities/Social Stratification |
October 2021 | 360 pages | SAGE Publications, Inc
Download flyer
Cherise A. Harris and Stephanie M. McClure
"I Think Black People are Way More Oppressed Than Gay People": How and Why Intersectionality Matters
Andrea Baldwin
"I'm a Feminist So That Means I am for All Women": The Role of Intersectionality in "Sisterhood"
Latoya Lee
"Why is There a Black Twitter and a Gay Twitter?" The Role Social Media Play in Making Categories of Difference Visible
Kylan de Vries
"If He Looked More Like a Woman, It Would Be Alright for Him to Be Trans": How the Intersections Affect the Experiences of and Attitudes Toward Transgender People
Afshan Jafar
"Muslim Women Covering Themselves is Oppressive": Hijabs, Burkas, and Niquabs Through an Intersectional Lens
Freeden Blume Ouer, Uriel Serrano, David Turner
"If Black Boys Didn't Look So Scary, They Wouldn't Get Into Trouble": Adultification and the Effect of the Intersections on Black Boys
C. Chic Smith
"Why Do Black Women Have Such Crazy Hairstyles?": Understanding Black Hair Through an Intersectional Lens
Jennifer Rudolph
"When I Think of Disability I Think of a White Guy in a Wheelchair": The Social Construction of Disability and its Intersections with Race, Class, Gender, and Sexuality
Carly Foster
"There's Nothing Wrong with the Hot Latina Stereotype": How Intersections Play a Role in Public Perception of and Policies Toward Latinx Women
Karen Wu
"I Just Think Asian Men Aren't Sexy!": Race, Class, Gender, Sexuality, and the Devaluing of Asian Men and Women
Stephanie Medley-Rath
"A Family is Two Parents, Their Children and the Picket Fence": The Impact of Invisible Intersections on How We Talk About "The Family"
Anne Roschelle
"We Must Protect All Children!": An Intersectional Look at Which Children Really Matter and Which Don't
Stephanie McClure
"But Aren't the Poor Mostly Inner-City Blacks?": Understanding Poverty from an Intersectional Perspective
Cherise A. Harris and James M. Thomas
"Chidlren in Foster Care are Probably There for a Good Reason": Race, Class, Gender, Ability, and the Hidden Families of the Child Welfare System
Tomeka Davis
"School Choice is Really the Only Way to Make Sure Kids Get the Best Education": The Realities of Charter and Magnet Schools for Children in the Intersections
Doug Kallner
"Mass Shooters are Really Just Lone Wolves with Mental Health Issues": The Role That Whiteness, Social Class, and Toxic Masculinity Play in Mass Shooting Incidents
Angela Stroud
"Guns Don't Kill People. People Kill People": Understanding the Gun Control Debate from an Intersectional Perspective
Ted E. Thornhill and Autumn J. Asher BlackDeer
"It's Not Racism! It's Economic Anxiety!" Understanding the Role the Intersections Play Amongst Trump Supporters
Ms. Estefany Lodono
"Women Should Just Use Birth Control Instead of Having Abortions": Understanding Reproductive Freedom in the Context of the Intersections
Julia Flagg
"Since We All Breath the Same Air, The Environment Affects Us All in the Same Way": An Intersectional View of the Impact of Environmental Toxins
Nancy Lopez
"If People Just Took Better Care of Themselves, They Wouldn't Have Health Issues": How the Intersections Affect Health and Health Care Access
Stephanie McClure, Cherise Harris, Andrea Baldwin
"Fighting the System Just Feels Impossible!": Coalition-Building Across Categories of Difference