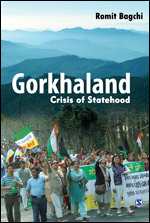 Share
June 2012 | 480 pages | SAGE Publications Pvt. Ltd
Download flyer
Gorkhaland is an attempt by a journalist to unravel the various layers of the ongoing crisis in the Darjeeling hills, where the Nepali-speaking community is locked in a political struggle with the state of Bengal, of which it is a part. The author endeavors to delve into the deeper recesses of the psyche of the Gorkha community settled in these restive hills and attempts to put the prevailing stereotypes under a subjective scanner.

The author approaches the century-old tangle from four perspectives: the history of the region, the problem of assimilation of the various ethnic groups, the course of the movement, from Dambar Singh Gurung to Bimal Gurung, and the hurdles in the way of the fulfillment of the statehood dream.

The problem appears insoluble given the odds set against the formation of a separate state, and the people are poignantly aware of the impossibility of realizing this collective reverie. Yet they cannot give in. The writer attempts to give expression to this poignancy at the collective level—the frustration which gets accentuated into a fratricidal mayhem with or without provocations.