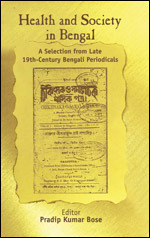 The second half of the 19th century witnessed unprecedented shifts in scientific and medical knowledge in western Europe, which have resulted in many of our present-day notions of health, disease, sexuality, and of the human body and its processes. Some of these notions travelled from Britain to its colonies, notably India, where the introduction and establishment of western medical systems became associated with governance.

This remarkable volume discusses, for the first time, the nature of the interaction between western medical science and local knowledge and practices in late 19th-century Bengal through excerpts from important Bengali medical and scientific journals published between 1850 and 1900. The articles reproduced in this volume not only reveal the various ways in which western medicine combined with local practices, but also depict the customs, traditions, social practices, religion, and economy of 19th-century Bengal.

The five thematic chapters and the overarching introduction together discuss:

Overall, this important book shows how modern knowledge practices transplanted on to a foreign society were infiltrated in various ways by local practices and knowledge. Original and thought provoking, the volume will appeal to students and scholars of history, medicine, health, sociology and anthropology.

If one expects from this book a mere description of the sanitary condition of 19th century Bengal and debates between two the British (‘Western’) and the local (‘Oriental’) medical systems, one will be pleasantly surprised, because the discourse is not merely comparative…. Bose makes us re-evaluate the debates on colonialism, post-colonialism and internal colonialism in India.

…this book highlights the need to understand the conflicts between indigenous paradigms and one that is introduced when those interested in health management are involved in changing behaviour as away of improving health…. The book will be useful for sociologist, anthropologists and others interested in health services management…