Book > Major Work > Political Science (General)
SAGE online ordering services will be unavailable due to system maintenance on August 12th at 18:00 pm Pacific / 21:00 pm Eastern time. Thank you for your patience and we apologize for the inconvenience. 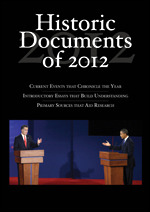 For more than 40 years the Historic Documents series has made primary source research easy by presenting excerpts from documents on the important events of each year for the United States and the world. Each volume includes approximately 70 events with well over 100 documents from the previous year, from official or other influential reports and surveys, to speeches from leaders and opinion makers, to court cases, legislation, testimony, and much more.

Historic Documents is renowned for the well written and informative background, history, and context it provides for each document. Each volume begins with an insightful essay that sets the year’s events in context, and each document or group of documents is preceded by a comprehensive introduction that provides background information on the event. Full-source citations are provided. Readers have easy access to material through a detailed, thematic table of contents and a cumulative five-year index that directs them to related material in earlier volumes.

Topics and events covered in the 2012 volume include: