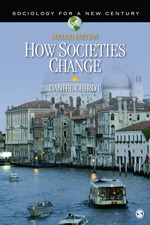 How have societies changed over the past 5,000 years? Welcome to the brief, manageable macro-sociology text that takes your students on a journey to answer this question.

This book, the only brief and affordable macro-sociology text available for undergraduates, describes how societies have changed over the past five thousand years. The discussion focuses on the idea that industrial societies, despite their great success, have created a new set of recurring and unsolved problems which will serve as a major impetus for further social change. This book explores development through historical narrative and examines the globalization/development paradox through in-depth case studies.

An interesting text with a useful range of information.

I thought this was an accessible text that would be useful to my students.

This is not a suitable text for research methodologies.

It's a concise and well-written book that covers 5,000 years of social change. The book is accessible to undergraduates; financially and academically. I will recommend it to a fellow colleague who teaches social change every fall semester.

For students with limited prior exposure to economics, politics, history or geography, this text provides a very readable cheap overview. The style of writing addresses some quite complex topics in everyday language and makes them understood.
Under active consideration to become required reading.

Easy to read and follow the main ideas; useful for understanding the main evolutions of the human society and state at a global scale through the eyes of a reputed sociologist (Daniel Chirot wrote also a book on the formation of the Wallachian state, nowadays Romania, from Middle Ages until Modernity). Not essential however for Medieval History, rather for Early Modern and Contemporary history.

I have read this book with delight and decided to recommend it to my students who pick the course Archaeological theory. The book is a useful introduction into social evolution and change and what is especially important, it takes an interdisciplinary approach, combining contributions of many disciplines. The text does not go into great detail and therefore is accessible to undergraduate students. Providing a solid overview of the subject from the sociological perspective, it can serve as a basic textbook on the social history of humankind from its origins to the modern era.

I offer it as one of several optional readings. Some students use it - but order via Amazon. I also recommend this wonderful macro-sociology history to various groups in the community when I talk with them about long term trends and current conditions. Really wonderful book.

We have had a lot of dramatic social, economic, and political changes since the first edition of this book was published in 1994. We are moving into a new kind of industrial world that some have called "post-industrial," but that is really a sixth cycle that follows a regularly occurring set of cycles and changes that have characterized the entire globe since the original Industrial Revolution in the late 18th Century. As before, each new stage is marked by a series of crises that traumatize human societies. The fact that we are now more globalized than ever does not alter this fact, and as the new edition goes to press, we are in the midst of a new set of difficult challenges that could bring with them new world conflicts, depressions, and difficult readjustments. This was certainly not yet the case in the early 1990s.

Beyond this, however, much else has changed. Our understanding of early, pre-historic humanity has been modified substantially because of new DNA analysis and archeology. Interpretations of ancient history and of the centuries preceding the modern era have been enriched by new findings and scholarship. All that has to be taken into account if we are to better understand how social change worked in the past. The accepted versions of how western Europe became the first modern part of the world have been seriously challenged, and interestingly, the recent rise of China has led to questions about whether or not Europe was ever all that much more advanced. So, very recent changes in the past 15 years have forced all of us to reconsider what we thought we knew about the past.

Finally, it has to be said that from the American point of view, and that of other advanced capitalist democracies in the early 1990s the future looked much more rosy then than it does now. Of course, social theory ought not be subjected to drastic changes just because societies change, especially if we realize that constant change is always inevitable. Good theory should always take that into account. But it is important that all of us be reminded that standing still in the policies that guide major economic, political, and social institutions, and even our cultural ideals can be a prescription for disaster if the world around us changes and we fail to adapt. This has always been true, and it is still the case. What the new edition of this book tries to do is to make all of this clear to students by going over the major kinds of social change that have occurred in the past, and continue today to alter our environment, our societies, and our entire globe.