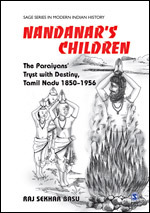 The narrative of this book is built around the historical experiences of the Paraiyars of Tamil Nadu. The author traces the transformation of the Paraiyars from an 'untouchable' and socially despised community to one that came to acquire prominence in the political scene of Tamil Nadu, especially in early 20th century. Through this framework, the book studies a number of issues: subaltern history, colonial ethnography, agrarian systems, agrarian bondage, land legislations, and the interventions by missionaries and social and political organizations.

While delving into the Paraiyar community's own understanding of history, the book presents the conflicting versions of Adi Dravida politicians and nationalist politics. It establishes that nationalism still serves as the overarching framework under which caste, class and other forms of competing identities operate in the Indian state. It presents a rare amalgamation of government, private and vernacular sources, which adds to its distinctive quality.

The author is to be complimented for taking up a pioneering and path breaking study of the history and politics of the Parayan’s community from 1850-1956…[The book] is based on extensive research into historical, political, ethnographic and other source of information available in different part of Tamil Nadu, New Delhi and elsewhere…. [The Author] has written an excellent book which needs careful study by those specialising in the area of the politics and sociology of depressed communities in India.

The book is a contribution to the domain of subaltern history and it states without an open claim that the historians should depend, primarily on archival sources. The use of varied and rich archival materials and chronicles in the book establishes this claim. [It] takes its academic credibility while historicizing a lower caste political movement. [It] is placing before us the warp and woof of the political history of the subaltern people… [It] points to the changing faces of caste-politics in the Indian political scenario.

This 400-page book, based on intensive research and fieldwork in Tamil Nadu, has used lot of archived materials and government reports and documents to substantiate its argument… This book will be a useful guide not only to social scientists and researchers but also to laymen who are interested in understanding Dalit movements.