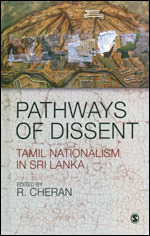 Sri Lanka, the 'Teardrop Isle', has been under international attention for more than two decades for its ethnic conflict and civil war, and recently, under intense media scrutiny for what seems like a decisive end to the civil war. While the ethnic conflict and the civil war have been the subject of numerous academic and non-academic studies in both the East and the West, there has been no significant research on nationalism, particularly Tamil nationalism, as it manifests itself in Sri Lanka.

Pathways of Dissent: Tamil Nationalism in Sri Lanka endeavors to fill this important academic gap through its collection of ten in-depth essays that present a wide perspective of the subject. The book holistically portrays Tamil nationalism from various disciplinary perspectives like history, political science, international relations, art, literature, sociology, and anthropology. In doing so, it tries to understand the nature of nationalism as it emerges in these areas and adds to the richness and complexity of the problematic.

The significance of this collection is not only its breadth of vision, but also the origins of the hypotheses. The essays cite primary sources from Tamil society and culture that are not usually referred to. It is the first multi-disciplinary collection of essays exploring the state of Sri Lankan Tamils and their nationalistic moorings. The book succeeds in adding further scholarship to the academic debate centered on nationalism, politics, sociology and ethnic conflicts. Academics and readers with a focus on ethnic conflicts, peace studies, nationalism, Tamil politics and society and South Asian history will find the book to be an essential reference source.

At a time when public discourse in Sri Lanka on the ethnic conflict and the issues growing out of it is bristling with misconceptions, misperceptions, jaundiced judgments, and even down right lies, this book makes a welcome entry into our midst with the abundant capability of putting the record straight on a multiplicity of such heatedly-contested matters. Chief among these issues on which clarity and perspicacity is remarkably achieved is the nature of Tamil militancy…a must read…. Pathways of Dissent meets a long-felt but neglected need in Sri Lanka’s efforts to more fully understand what went wrong in the island’s post-independence political history, from the point of view of the articulate sections of the Tamil community. It helps greatly in coming to grips with the ‘other side of the story.