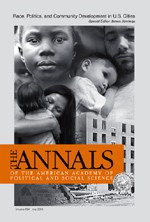 As U.S. cities compete for economic resources, many city leaders adopt business-friendly policies, which boost opportunities for big businesses and institutions in their area. This progrowth strategy proposes to generate jobs for residents and higher tax revenues for local government. As a result, according to the logic of progrowth, economic benefits will trickle down to improve the living conditions in working-class and impoverished neighborhoods.

In spite of this strategy, poverty rates among urban Latinos and Blacks is staggering, even in cities that have pursued neoliberal policies. These progrowth strategies seem to have had little or no impact on resolving problems like poverty, unemployment, homelessness, and the alienation of youth from communities of color. Community development has been and continues to be a response to these kinds of problems. But local political struggles can determine the direction of community development towards neighborhood empowerment and representation of neighborhood interests, versus, community development on behalf of progrowth policies.

This issue of the ANNALS examines the interplay between progrowth politics, community development, and race. It goes well beyond a broad brushstroke of the topic and examines several specific cities and how they have implemented these strategies - and their impact on impoverished populations and race relations. By using concrete examples, the authors discuss how community development fits - or does not fit - within the framework of progrowth policies and politics. The volume covers several important themes:

· Community development is not politically neutral and must be discussed within a broad political, economic, and even global context.

· Local politics play a major role in determining the direction, nature, and possibilities of community development.

· A high level and sustained community participation is crucial for the representation of low-income urban neighborhoods in cities pursing progrowth policies.

· Race remains a fundamental issue I city politics and influences the political interplay between progrowth strategies and community development.