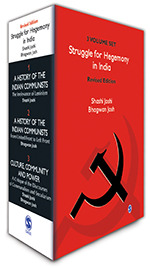 Share
Courses:
Communism
December 2011 | 1 276 pages | SAGE Publications Pvt. Ltd
Download flyer
Struggle for Hegemony in India is a three-volume series that delineates the multidimensional activities of the Indian communists. It explores the role of the communist movement within the democratic polity of India. The series addresses the changing relationship of the communists with the Indian National Congress, their emergence as an opposition party, the details of the formation of Left Front governments in state politics, and their experience with insurrectionary movements in the country.

Deploying Gramsci’s concept of hegemony, the series comments on the failure of the left-wing to establish itself as a hegemonic force in India. The interpretation of the concept in terms of power between different ‘classes’ and ‘communities’ is groundbreaking; it not only enlarges the meaning of ‘hegemony’ but also makes it the basis of a new historiography.

This revised edition covers an extensive period from 1920 to 2009, tracing the communist movement from its earliest years in India to contemporary times. The authors, both grounded in Marxist literature, are able to expertly analyze the various contours of the communist movement in South Asia within the context of the struggle for power and hegemony.

VOLUME 1
Hegemony and the Historical Method
The Irrelevance of Leninism
The Non-cooperation Movement and the Birth of Workers' and Peasants' Parties
To be or Not to be: Communist Party or WPP?
The Colonial State, Indian Capitalists, and the Left : State, Nation and Class
Nehru's Paradigm
Towards Left Hegemony : Molecular Changes in Mass Ideology
Salt and the Steelframe Contending Hegemonies
'Sarkar Hargai'
Of Strategies and Methods of Struggle
The Politics of Nation and Class
'Sectarianism' or Alienation
In the Ghetto
M.N. Roy, Indian Communists and the Third International
VOLUME 2
The Colonial State
Gandhian Strategy and the Framework of Hegemonic Politics
State Policy, Congress Crisis, and the Birth of a New Ideology
Gathering Forces of the Left and Government's Strategy of Suppression
The Third International and the Indian Communists : Communist Party and the Disunited National Front
Marxism and Marxist Practices
Of Political Issues and Ideological Conflicts : Colonial Constitution, Council Entry and Office Acceptance
The Ministries and the Left : Experiments with Class Adjustment
The Left and the Ministries : Experiments with Class Confrontation - I
The Left and the Ministries : Experiments with Class Confrontation - II
The Divided left: Notes on Permanent Disunity
Politics of Transformation vs Politics of Alternative
Communists since Independence
Epilogue - From Naxalbari to Lalgarh: The Continuity of Insurrectionary Politics
VOLUME 3
Culture, Community and Power
Outline of a Theory of Cultural Power
The Power of the Past : Two Paradigms of Cultural Hegemony
Power and Hegemony: The Site of Cultural Struggle
The Cultural Faultline and its Mirrors
The State in Medieval North India and the Cultural Faultline
Women and Sexuality in the Discourse of Communalism and Communal Violence
Narratives of Cultural Context
The Cultural Complexion of the Nation: Indian National Congress versus Hindu Mahasabha
Cultural Limits to Secular Politics : Sermons On National Unity
Three Songs
Conclusion
Postscript: Dilemmas of Indian Secularism
Bibliography
Index