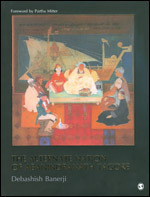 "Debashish Banerji's study of Abanindranath is a significant addition to existing scholarship. Departing from the received tradition of looking at Abanindranath as an artist shackled by his commitments to nationalism he recognizes the complexity cross-cultural encounters bring to the colonial world and locates Abanindranath squarely within this new space of intersubjectivity, dialogue, and mutual transformation. Deftly combining theoretical insights with a wealth of historical and familial facts he demonstrates how Abanindranath through his simultaneous engagements with the pre-modern communitarian and the colonial modern brings in not only an alternate modernism but also intuits the postmodern itself."
—R Siva Kumar
-
The Alternate Nation of Abanindranath Tagore provides a revisionary critique of the art of Abanindranath Tagore, the founder of the national school of Indian painting, popularly known as the Bengal School of Art. The book categorically argues that the art of Abanindranath, which developed during the Bengal Renaissance in the 19th–20th centuries, was not merely a normalization of national or oriental principle, but was a hermeneutic negotiation between modernity and community. It establishes that his form of art—embedded in communitarian practices like kirtan, alpona, pet-naming, syncretism, and storytelling through oral allegories—sought a social identity within the inter-subjective context of locality, regionality, nationality, and trans-nationality.

The author presents Abanindranath as a creative agent who, through his art, conducted a critical engagement with post-Enlightenment modernity and regional subalternity. He sought the transcendence or individual autonomy on one hand and communitarian inter-subjectivity on the other, which became the underlying principles of the postcolonial legacy of his art. The author theorizes this modernity and communitarian inter-subjectivity as the alternate nationalism which theoretically offers a reversal of the mainstream evaluation of Abanindranath's art.

This book is well-illustrated with many of Abanindranath's creations. It will be an invaluable reference material for students, researchers, and academics from various subject areas such as arts and humanities, sociology, and cultural studies. It will be precious for artists, art collectors, connoisseurs, museums, and art galleries.

Debashish Banerji, in his impressive new study…, presents Abanindranath neither as nationalist hero nor Orientalist comprador but rather a free agent engaged in varied cultural exchange…. When he chose to make his illustrious forbear the subject of his book, he was able to infuse the aridities of postmodernism with the clarity and warmth of personal narrative…. Steeped in the writings of Continental masters such as Bourdieu, Foucault and Heidegger, Banerji is no slouch when it comes to textual criticism, but he also has a keen artistic eye, and a certain laidbackness more characteristic of the ‘Left Coast’ (California) than the Left Bank of the Seine. When he brings the hybrid background to bear on Abanindranath’s work, the results are often remarkable. In each of the five chapters that make up the body of his book, Banerji couples a particular group of paintings with a particular area of theoretical lore…. Banerji’s skill as an interpreter of Abanindranath’s paintings is displayed best in Chapter 4, which deals with the painter as narrator…. Banerji proves himself to be a talented storyteller himself – something that those who have attended his public presentations already know…. Banerji enlivens his account with oral history material provided by his mother…. Sage India should be congratulated not just for publishing Banerji’s book but also for enriching it with thirty-two pages of full-colour plates. These make it possible for readers to follow the author’s innovative readings in all their intricate detail.

Banerji’s book acquires a special importance because of his attempt to theorise the creative experiments of an artist exposed to a variety of influences in a colonial metropolis. The concept of ‘alternate nation’ that he builds around the corpus of Abanindranath’s works, is a stimulating idea based on a provocative hypothesis… Banerji’s erudite study is a fascinating narrative of how Abanindranath always defied the constrictions laid down by such theories, either by his admirers or detractors.

It was comforting to read Debashis Banerji’s ‘The Alternate Nation of Abanindranath Tagore’. The book is a much needed addition to the existing body of literature on the artist and his words. It locates the figure of Ababnindranath in a post Enlightenment social complex, and goes on to discover his multi-layered engagement with the world around. What is even more important is that it does this without resorting to the mainstream framework of Cultural Nationalism on hand, and on the other to the existing communitarian critiques of the same.