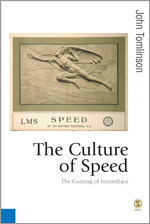 Share
Series:
Published in association with Theory, Culture & Society
Courses:
Sociology of Culture
October 2007 | 192 pages | SAGE Publications Ltd
Download flyer
'John Tomlinson's new book is an invitation to an adventure. It contains a precious key to unlock the doors into the unmapped and unexplored cultural and ethical condition of 'immediacy'. Without this key concept from now on it will not be possible to make sense of the social existence of our times and its ambivalences'

'Tomlinson's study is a most welcome, stimulating and challenging exploration of the cultural impact and significance of speed in advanced modern societies. It successfully interweaves theoretical discourse, historical and contemporary analyses and imaginative use of literary sources, all of which are mobilised in order to provide an original, intellectually rewarding and critical account of the changing significance of speed in our everyday experience' - David Frisby, London School of Economics and Political Science

Is the pace of life accelerating? If so, what are the cultural, social, personal and economic consequences?

This stimulating and accessible book examines how speed emerged as a cultural issue during industrial modernity. The rise of capitalist society and the shift to urban settings was rapid and tumultuous and was defined by the belief in 'progress'. The first obstacle faced by societies that were starting to 'speed up' was how to regulate and control the process. The attempt to regulate the acceleration of life created a new set of problems, namely the way in which speed escapes regulation and rebels against controls. This pattern of acceleration and control subsequently defined debates about the cultural effects of acceleration. However, in the 21st century 'immediacy', the combination of fast capitalism and the saturation of the everyday by media technologies, has emerged as the core feature of control. This coming of immediacy will inexorably change how we think about and experience media culture, consumption practices, and the core of our cultural and moral values.

Incisive and richly illustrated, this eye-opening account of speed and culture provides an original, essential guide to one of the central features of contemporary culture and personal life.

Social Changes in a Global World