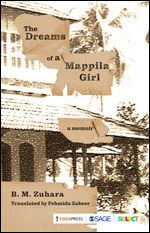 Share
Courses:
Introductory Sociology
July 2022 | 232 pages | YODA Press SAGE Select
Download flyer
‘I grew up at a time when Muslim girls did not even have the freedom to dream.’

As a young Muslim girl growing up in the 1950s in a small South Indian village, B. M. Zuhara had simple dreams—to go to the newly opened ‘talkies’ in town and watch a movie, play with her brothers in the rice fields, learn the ancient martial art of Kalari Payatu with them, stand on the bridge and listen to the songs sung by the farmhands as they worked. But she soon realised that even being the pampered, youngest child of her family would not help her in realising some of her dreams because of her gender.