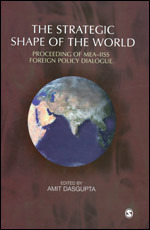 The International Institute for Strategic Studies (IISS) is the world's leading think tank on international security, political risk and military conflict. It provides trusted and independent analysis for professionals and institutions wanting cutting-edge information on global developments and their effect on political and economic affairs. Similarly, the Public Diplomacy division of the Ministry of External Affairs was especially created in April 2006 as it was increasingly felt that in today's world, successful foreign policy practitioners would need to have an open and regular dialogue with civil society, NGOs, academia, think tanks and media.

This dialogue between the IISS and the Public Diplomacy division of the MEA focuses on three subjects: the strategic shape of the world (in terms of foreign policies of different nations), international terrorism and energy security. It emphasizes that in the context of globalization and economic interdependence, the real source of danger lies not in the fact of supremacy of the Westphalian state order, but in issues like terrorism, energy security and environmental and climate change which threaten stability. These are recognized as global threats and the dialogue focuses on ways to deal with them.

This is an important read because it puts you in the room with the people shaping India’s foreign policy…. There are also good discussions about India’s relations with an increasingly self-confident China and an increasingly over-confident Russia as well as the US, the European Union and other regions. There is also a laudable effort to cover energy security...At 124 pages, it’s a quick, but valuable read.