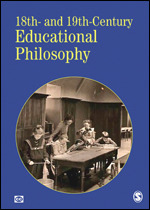 This DVD examines 18th- and 19th-century educational philosophies and profiles the key educational thinkers of this era. It defines the philosophy of education; details influences on 18th- and 19th-century education; and describes the ideas of Locke, Rousseau, Wollstonecraft, Pestalozzi, Spencer, Bronson, Alcott, Froebel, and Harris. Addressing the late 19th and early 20th centuries, the program also discusses pragmatism and profiles John Dewey.