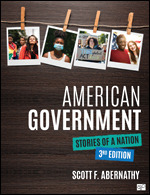 In the Third Edition of American Government, author Scott F. Abernathy tunes in to the voices of all Americans, showing how our diverse ideas shape the way we participate and behave, the laws we live by, and the challenges we face. From the Constitutional Convention to the protests in Minneapolis, each chapter features rich, personal narratives that illustrate how the American political system is the product of strategies, calculations, and miscalculations of countless individuals. It focuses on real people, the actions they take, the struggles they face, and how their choices influence outcomes. The key concepts are memorable because they are tied to real politics, where students see political action and political choices shaping how institutions advance or impede the fulfillment of fundamental ideas. Participation is at the heart of this groundbreaking new text, with ample background on how and why to participate. Not only will all students see themselves reflected in the pages, but they will come to understand that they, too, are strategic players in American politics, with voices that matter.

Instructors: SAGE coursepacks and SAGE edge online resources are included FREE with this text. For a brief demo, contact your sales representative today.

SAGE coursepacks for instructors makes it easy to import our quality content into your school’s learning management system (LMS)*. Intuitive and simple to use, it allows you to

*For use in: Blackboard, Canvas, Brightspace by Desire2Learn (D2L), and Moodle

Don’t use an LMS platform? No problem, you can still access many of the online resources for your text via SAGE edge.

With SAGE coursepacks, you get:

·         an intuitive, simple format that makes it easy to integrate the material into your course with minimal effort;

·         assessment tools that foster review, practice, and critical thinking, including:

o    instructions on how to use and integrate the comprehensive assessments and resources provided;

o    Comprehensive, downloadable, easy-to-use Media Guide in the Coursepack for every video resource, listing the chapter to which the video content is tied, matching learning objective(s), a helpful description of the video content, and assessment questions

·        an instructor's manual with chapter-specific discussion questions and class activities to help launch engaging classroom interaction while reinforcing important content;
?·         editable, chapter-specific PowerPoint® slides that offer flexibility when creating multimedia lectures so you don’t have to start from scratch; and
?·         all tables and figures from the textbook

SAGE edge for students enhances learning, it’s easy to use, and offers:

·         an open-access site that makes it easy for students to maximize their study time, anywhere, anytime;

·         eFlashcards that strengthen understanding of key terms and concepts; and

·         learning objectives that reinforce the most important material.