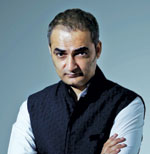 Anshul Chaturvedi began his journalism career as a hard news journalist, in 1996, and shortly thereafter became the editor of local English dailies based in Jammu, specialising in topics such as the Kashmir militancy and the ISI, an unlikely starting point for someone currently managing lifestyle content in Delhi. He then moved out of J&K to work with The Times of India’s (TOI’s) launch edition, in Chandigarh, in the year 2000. He was temporarily sent on deputation to the features section, but it soon became his primary work area, which it has been since then. He was then posted to Lucknow and worked as editor of multiple products across Uttar Pradesh (U.P.) for four years, attempting to bring Karva Chauth parties on page 3, while writing on U.P. politics for the TOI’s edit page. In 2005, he was brought to the capital, and so began his journalistic stint in Delhi as the editor of the Delhi Times. In the past few years, that role has expanded to include charge of many similar supplements in North India, and today he oversees features teams in about a dozen cities.

While he attempts to scrutinise high society and the glam world from the vantage point of his  primary job as the Delhi Times’ editor, personally, he spends time reading through the likes of Vivekananda, Iacocca and Covey, watching cricket and consuming everything on the Second  World War and Subhash Bose that he can find. A collection of his interviews with the three Khans of Bollywood over the past decade was published in the form of a book, Uncut (2013).  He is also an occasional writer on his version of everyday philosophy for The Speaking Tree.

Work Sucks! Or Do You?