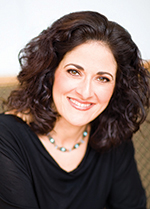 Homa Sabet Tavangar is the author of Growing Up Global: Raising Children to Be At Home in the World (Random House, 2009), lead author of The Global Education Toolkit for Elementary Learners (Corwin, 2014), and contributor to Mastering Global Literacy, by Heidi Hayes-Jacobs, ed. (Solution Tree, Nov. 2013).  Growing Up Global has been hailed by national education and business leaders and media ranging from Dr. Jane Goodall to the BBC, NPR, NBC, ABC, Washington Post.com, Chicago Tribune and Sun-Times, Boston Globe, PBS, Scholastic, Parents Magazine, Rodale, and many more.

Homa’s work is sparking initiatives to help audiences from CEOs to Kindergartners learn and thrive in a global context – and have fun along the way.  She is the Series Consultant to NBC TV’s original production of the animated children’s series Nina’s World, has served as Education Advisor to the Pulitzer Center on Crisis Reporting, and as a Visiting Scholar at the University of Pennsylvania; she is a contributing writer for the Huffington Post, PBS, Momsrising, GOOD, Ashoka’s Start Empathy, National Geographic and Edutopia, among other media, and is a sought-after speaker and trainer around globalization and global citizenship, parenting, globalizing curriculum, empathy, diversity and inclusion.

Homa spent 20 years working in global competitiveness, organizational, business and international development with hundreds of businesses, non-profits, and public organizations, before turning her attention to global education.  She has lived on three continents, is a Phi Beta Kappa graduate of UCLA and Princeton University’s Woodrow Wilson School of Public and International Affairs.  She speaks four languages and her religious heritage includes four of the world’s major faiths.  Passionate around issues of opportunity and equality for women and girls, she has worked on these issues for private companies and the World Bank, and served on various non-profit Boards, including, currently on the Board and Executive Committee of the Tahirih Justice Center, a national leader protecting immigrant women and girls fleeing violence.  She is married and the mother of three daughters.