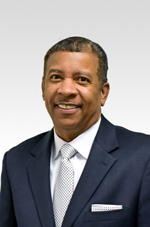 Marcus J. Newsome is the director of the Virginia Superintendents Leadership Academy. Previously he served for 16 years as an award-winning school superintendent in Newport News, Chesterfield County and Petersburg City (Virginia). In 2015 his work was recognized by the U.S. Office of Educational Technology during a White House ceremony as a leader in transforming schools from a print to a digital learning environment. He has served as a consultant to governors, members of congress, and both national and international business leaders on solutions for closing achievement gaps, narrowing the digital divide, assessment design, professional development, and 21st century teaching and learning. Newsome has earned doctorate degrees in educational leadership and religious education. He began his career as an art and mathematics teacher in the District of Columbia, and later served as a curriculum writer, principal, and district administrator. He has also served as an associate professor for several universities, including Harvard University and Virginia Commonwealth University. An ordained minister, and dedicated husband and father, he has dedicated his career to the service of children.