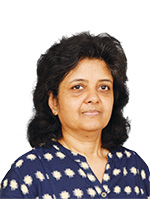 Namrata Gupta is a sociologist who works on women in science and engineering, with a focus on how the participation and rise of women scientists in academia and research laboratories is affected by the organizational aspects, patriarchal sociocultural norms and a lack of universalism in science. Her research also includes the study of women engineering students and relationship between gender and technology. She has published extensively with reputed journals of SAGE and other publishers. She has several publications to her credit in collaboration with renowned international researchers, such as those in the journals Minerva and Cambridge Journal of International Affairs, in the report ‘Gender and Excellence in the Making’ published by the European Union in 2004, and in the book Handbook of Science and Technology Studies published in 2007. She has been the recipient of several fellowships and grants from the Indian Council of Social Science Research (ICSSR). She has also been a member of the Associate Board of Work, Employment and Society from 2012 to 2017 and has been invited to international workshops including an NSF-funded workshop in the USA.
Women in Science and Technology