Rekha Chowdhary served at the University of Jammu as Professor of Political Science till 2013. Since her superannuation, she has been Indian Council of Social Science Research (ICSSR) National Fellow and Fellow of Indian Institute of Advanced Study, Shimla. Earlier, she was a Fulbright Scholar at South Asia Studies, School of Advanced International Studies (SAIS), John Hopkins University, Washington, DC (2005); Commonwealth Fellow at Queen Elizabeth House (QEH), University of Oxford (1997–1998); and Fellow of South Asian Visiting Scholar Programme (SAVSP) at QEH, Oxford (1992–1993). She has been working on Jammu and Kashmir and dealing with issues related to identity politics, ethnicity, nationalism, conflict and peace process, and democratic politics. Following the developments in Jammu and Kashmir in the last three decades, she has been writing extensively about the changing trends in militancy and separatism and the competitive politics in leading national and international journals. Her more recent publications include Jammu and Kashmir: Politics of Identity and Separatism (2016) and Identity Politics in Jammu and Kashmir (2010).
Jammu and Kashmir: 1990 and Beyond 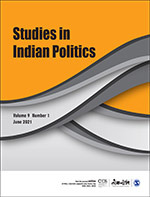