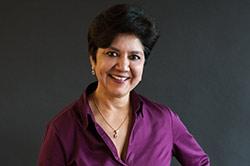 Suniya S. Luthar is Professor of Clinical and Developmental Psychology at Columbia University’s Teachers College. She received her Ph.D. from Yale University in 1990. Dr. Luthar's research involves vulnerability and resilience among various populations including youth in poverty and children in families affected by mental illness. Her recent work has focused on children in affluent communities, and her findings on problems among these youth—particularly pertaining to substance use and anxiety—have received much attention in the scientific community, among parents and school administrators, and in the national media. In addition to numerous peer-reviewed journal articles, Dr. Luthar’s books include Children in Poverty: Risk and Protective Forces in Adjustment; Developmental Psychopathology: Perspectives on Adjustment, Risk, and Disorder; and most recently, Resilience and Vulnerability in Childhood: Adaptation in the Context of Adversities. Dr. Luthar is Associate Editor of Developmental Psychology and Development and Psychopathology. She has served as Chair of a grant review committee at the National Institutes of Health and is currently a member of the Governing Council of the Society for Research on Child Development, and of the American Psychological Association's Committee on Socioeconomic Status. For her distinguished contributions to science, she has been recognized as a Fellow of the American Association for Psychological Science (APS) and has received several awards including a Dissertation Award, and the Boyd McCandless Young Scientist Award, both from the American Psychological Association, a Research Scientist Development Award from the National Institutes of Health, and an American Mensa Education and Research Foundation Award for Excellence in Research on Intelligence.
Poverty and Children's Adjustment