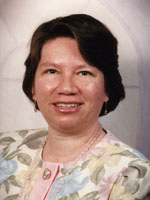 Virginia Gonzalez has an interdisciplinary professional and academic background (BA in psychology, 1986, from the Catholic University of Lima-Perú; MA in bilingual special education, 1988, and PhD in educational psychology, 1991, both graduate degrees from The University of Texas at Austin). One of Gonzalez's major areas of expertise is the development of multidisciplinary models explaining sociocultural and linguistic factors influencing alternative assessment, learning and developmental processes, and instructional programs in bilingual/ English-as-a-second-language (ESL), low socioeconomic status, Hispanic children. Gonzalez has conducted multiple research studies that have been published in the form of books and journal articles, have been disseminated at national/international conferences, and have been applied for the assessment and instruction of diverse learners in the public school setting, and of international ESL students in higher education. These studies have generated alternative models and research methodologies, with important educational applications for the assessment and instruction of ethnic minorities.

In light of this scholarly work, Gonzalez has been recognized as an outstanding and prolific scholar by major professional organizations in the interdisciplinary fields of second language learning, bilingual education, and cognitive and language development. Among the many recent recognitions that Gonzalez has received for her scholarly and service work are: she was elected to serve as a member of the Executive Special Interest Group (SIG) Committee, and the Program Committee for the American Educational Research Association (AERA) for a three-year term (2007-2010); she was presented with a Service Award by the AERA Bilingual Education Research SIG in April 2007; she served as a chair and discussant for an Invited Presidential Symposium, entitled "Socio-Historical Factors Affecting ESL US Immigrant Public Schools Students' Academic Achievement," presented at AERA 2008 Annual Meeting in New York City; and she was selected by the Council for International Exchange of Scholars (CIES) as a recipient for a Fulbright Senior Specialist Grant with the University of Costa Rica, December 2008.