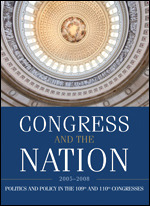 The signature resource for perspective and analysis on the U.S. Congress

Chronicling the highly partisan, yet dynamic legislative environment during the second term of President George W. Bush, Congress and the Nation XII is the most authoritative reference on congressional trends, actions, and political and policy controversies. The newest edition in this award-winning series documents the most fiercely debated issues in recent American politics, providing a unique retrospective analysis of the policies the U.S. Congress crafted during the tumultuous final years of the Bush presidency.

Congress and the Nation XII offers thorough coverage of congressional activity in response to:

The book also captures the politics and policy implications of the Bush presidency as well as the causes and effects of the partisan turnover in Congress after 2006. Organized by policy area, each chapter contains summaries of legislative activity, including bills passed, defeated, or postponed.

?No other authoritative source guides readers seamlessly through the policy output of the national legislature with the breadth, depth, and authority of Congress and the Nation.