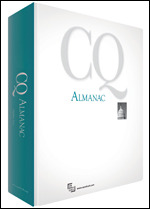 Share
Courses:
Congress | Introduction to American Government
November 2015 | CQ Press
Download flyer
CQ Almanac is the essential resource that chronicles and analyzes the major bills brought before Congress in the previous year. Published each summer, this non-partisan reference work offers exclusive insight into the forces that drove action on legislation.

Features of the 2014 Print Edition include:

Previous editions of CQ Almanac are also available in print from 1974-2013. Contact us at order@sagepub.com for details or to add the new and past editions of this vital resource to your collection today!