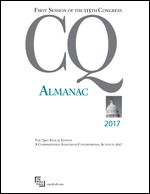 Trusted by scholars for over 70 years, the latest edition of CQ Almanac provides a nonpartisan look at the issues that mattered most in 2017 with original narrative accounts of the major legislative efforts carried out by lawmakers during the congressional session. Arranged thematically, it organizes, distills, and cross-indexes for permanent reference the full year in Congress and in national politics.

Features of the 2017 Edition include:

Do you value nonpartisan political reporting? CQ Almanac has been providing unbiased coverage of Capitol Hill for over 70 years. Get the ultimate in political analysis with the CQ Almanac Archive, which includes every volume dating back to 1945. On top of volume and topic browsing, the Archive also includes a useful policy browse feature. This tool allows researchers to follow important legislative issues across decades to better place current debates in context.