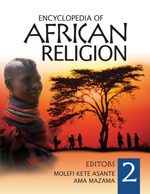 "Numerous titles focusing on particular beliefs in Africa exist, including Marcel Griaule's Conversations with Ogotemmeli, but this one presents an unparallelled exploration of a multitude of cultures and experiences. It is both a gateway to deeper exploration and a penetrating resource on its own. This is bound to become the definitive scholarly resource on African religions."
— Library Journal, Starred Review

"Overall, because of its singular focus, reliability, and scope, this encyclopedia will prove invaluable where there is considerable interest in Africa or in different religious traditions."
–Library Journal

As the first comprehensive work to assemble ideas, concepts, discourses, and extensive essays in this vital area, the Encyclopedia of African Religion explores such topics as deities and divinities, the nature of humanity, the end of life, the conquest of fear, and the quest for attainment of harmony with nature and other humans. Editors Molefi Kete Asante and Ama Mazama include nearly 500 entries that seek to rediscover the original beauty and majesty of African religion.

· Reveals the complexity, texture, and rhythms of the African religious tradition to provide scholars with a baseline for future works

The Encyclopedia of African Religion is intended for undergraduate and graduate students in fields such as Religion, Africana Studies, Sociology, and Philosophy.

"This volume is significantly more comprehensive than the relevant sections of S. Glazier’s Encyclopedia of African and African-American Religions (Routledge, 2001). Articles range from broad essays such as “Creation,” “Rites of Passage,” and “Circumcision” to shorter entries on topics such as the Pocomania religion, sangoma (a type of Zulu healer), and the Yoruba deity Ifa. There are numerous articles on the religious traditions of specific groups, as well as articles on important individuals. The religious traditions of the African diaspora, such as Santeria and Vodou, are also covered. The information is generally accurate and clear. A short bibliography follows each of the signed articles, as do cross-references, though sometimes these are inadequate. A reader’s guide lists the articles by type, and the helpful appendix lists the names of God used among different groups. Full access will be impeded by the author’s occasional use of the African form of Egyptian gods’ names, rather than the more familiar Greek forms. For example, there is no reference to Osiris, who appears here under the name Ausar, and although there is an article titled “Thoth,” his name in other articles becomes Tehuti, with no explanation. The black-and-white illustrations are sporadic, but adequate. Overall, because of its singular focus, reliability, and scope, this encyclopedia will prove invaluable where there is considerable interest in Africa or in different religious traditions."
–Sue Giffard, Ethical Culture Fieldston School, New York City