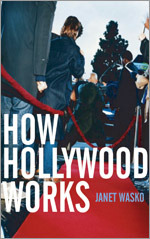 Share
Courses:
Introduction to Film Studies
December 2003 | 248 pages | SAGE Publications Ltd
Download flyer
This is a book about the US motion picture industry - its structure and policies, its operations and practices. It looks at the processes that are involved in turning raw materials and labor into feature films. It describes the process of film production, distribution, exhibition and retail - a process that involves different markets where materials, labor and products are bought and sold. In other words, this is a book about how Hollywood works - as an industry.

- examines the role of the major studios and the other 'players' - including, law firms, talent agents, and trade unions and guilds

- provides access to hard-to-find statistical information on the industry

While many books describe the film production and marketing process, they usually do so from an industry perspective and few look at Hollywood critically from within a more general economic, political and social context. By offering just such a critique, Janet Wasko's text provides a timely and essential analysis of how Hollywood works for all students of film and media.

"This book is a valuable summary of film industry practices in Hollywood. It provides good detail based on industry information that is relatively current. More importantly, it provides an excellent reference for scholars who want to include Hollywood in broader media studies and have no one good source to go to on "how Hollywood works." It includes several appendices, an excellent bibliography (plus references at the end of each chapter), and a solid index."

An excellent source for film students to learn about American film industry.

One of the frustrations of teaching the Hollywood system is the lack of texts that deal with the business/industry side. The aesthetics and history are all very well served by the secondary literature, however the real workings of Hollywood, as an exhibiting, producing machine, are often over looked.

This point however is addressed in Janet Wasko's book which comes highly recommended. It covers all the major areas of Hollywood business and places this into context with other, wider markets such as world cinema.

Its style of writing is solid yet readable and it manages to be both informative and engaging.

A Fly in the Curry