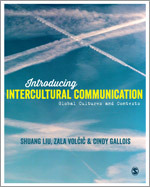 Introducing Intercultural Communication uses examples and case studies from around the world to situate communication theory in a truly global perspective. Covering the essentials from international conflict to migration and social networking, this book shows students how to master the skills and concepts at work in how we communicate and understand each other across cultural boundaries.

Each chapter brings to life the links between theory and practice, and between the global and local, showing you how to understand the influence of your culture on how you view yourself and others. In this book:

This book will guide you to success in your studies and will teach you to become a more critical consumer of information.

This new edition provides a very comprehensive and most up-to-date account of the key concepts and current issues in intercultural communication to accommodate the changing practice in an increasingly digitalized age. Theoretical discussions are complemented with case studies and stimulating questions for critical thinking and group discussion.

This second edition has continued its mission to stimulate students' critical thinking on intercultural communication across continents, using highly accessible language and vivid examples from various parts of the world. Theoretical concepts and cases have been enriched and updated. The "Theory Corner" equips students with more cultural and related theories and resources which enable them to self-learn and explore further. Digital/mobile communication and its impact on cultural exchange is discussed to keep students abreast of the fast-changing cultural contexts in which they live and act.

The second edition of Introducing Intercultural Communication strikes a balance between theory and practice that I found really valuable. The global examples used throughout the book show an application of theories that otherwise can feel quite abstract. The whole book flows in a logical manner, however each chapter stands alone in providing a glimpse into global cultures and the theories we use to communicate within them.

Particularly notable is the chapter on Mass Media, Technology and Cultural Change, which highlights the influence of technology in everything we do. The book doesn’t simply speak about this change, but caters to it with a companion website that allows readers to access the content in an interactive capacity. The content is accessible and introduces key concepts that will provide a foundation in the communication field, whether that is in further studies or the workplace.

Introducing Intercultural Communication was published in 2011 and written by a ‘multinational team of authors’ (book cover) from the University of Queensland, Australia. Though not officially presented as a textbook, it can obviously serve as one. The book is composed of 13 chapters and a very useful glossary. The chapters cover various aspects of intercultural communication and the Global: e.g. the influence of culture on perception, (non-) verbal communication, categorizations, subgroups and identities, intercultural conflicts, etc. Each chapter contains theory corners, case illustrations, and further reading

Brilliant book at the right level with excellent companion website

I use it as textbook in my Intercultural Communication class

The text book covers intercultural concepts in a modern and in-depth way. It moves away from US-centric views and tries to open up a broader perspective which makes it more attractive and relevant to students in Europe. The theoretical concepts are covered in the usual manner. What makes this book exceptional are the further reading blocks. The teaser texts provide a good idea whether it is worth the effort to look up an original research paper or not. Some very interesting aspects which take theoretical concepts to a deeper level can be found there! The layout is clear and easy to navigate, yet it appeals to older part-time students as well since it "looks" grown up.
I will definitely recommend this textbook as supplemental reading.

I think the book's structure predestines it for beginners. The short (and well visualized) intro chapters for each issue/theory/term give a good first overview, and the case studies indeed help to illustrate the discussion before.

What we needed was a book that focussed more narrowly on the international business context. This book is better suited to a humanities module. Students of communications and linguistics will get more out of this than business students. Not a bad book, but more general than specific.

Ch.1: Challenges of living in a global society