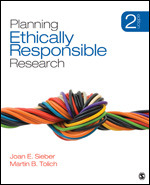 "Two important aspects covered in this text are the ethical considerations in qualitative research methodologies, and the attention that is needed in University Research Ethics Committees to understanding and addressing these methodologies."

“I particularly enjoyed the energetic and experienced tone of these writers and their willingness to take a stance...The chapters in the second half of the book on consent, confidentiality and autoethnography have thoughtful coverage of qualitative research issues. Equally welcome is their attempt to come up with constructive solutions rather than to simply criticize...The authors have established record in developing an evidence base on human research ethics and I shall be bringing their final chapter, with its ‘Ten Simple Solutions for Making Ethics Review a Learning Institution’, to my own ethics committee.”

I was curious to see if there was material here that I might use to introduce the subject of ethics in research to my students. I have currently placed this on my course reading list.

PERR 2 has the same basic objective as the First Edition of providing the theory and practical knowledge needed to plan ethically responsible research. However, it has broadened this objective in myriad ways, including the following. It:

· Explains the sensible origins of ethical requirements that have become senseless rules in some research contexts;

· Explores conflicts of interest between research and institutional objectives;

· Examines the sources of ethical research behavior beyond mere adherence to regulations;

· Examines the special problems that arise when ethical requirements based on the medical model of human research are applied to field research and qualitative research;

· Examines many of the emerging issues that were not discussed in 1992, e.g., conflict of interest, internet research, generic research, data sharing, experimental economics, and many others;

· Makes extensive use of internet resources;

· Provides major guidance to IRBs and investigators so that they can indeed plan ethically responsible research instead of resorting to one-size-fits-all rules that may be highly ineffective in some contexts and cultures. It is about planning for the unexpected before, during and after the research is conducted, and understanding the inherent uncertainty that surrounds any such plans.

· Seeks to spell out the responsibilities equally for researchers, IRBs, and the various institutions including research institutions, relevant scientific and professional societies, and seek to promote the establishment of a more collegial, trusting relationship among these various stakeholders.

A major theme in the book is problems that arise after review by an IRB.

This title is also available on SAGE Research Methods, the ultimate digital methods library. If your library doesn’t have access, ask your librarian to start a trial.