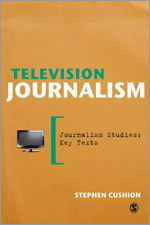 Television remains one of the most viewed, valued, and trusted sources of information available. This authoritative, persuasive account evaluates television journalism's contribution to society from a political, economic, and cultural framework.

Covering issues of ownership, control, policy, and regulation, the book is a blend of theory and history that examines the UK industry from a comparative perspective. It establishes the importance of television journalism, how it converges with other formats, and the ways in which it can survive an ever-changing terrain with the advent of new technologies and new media.

Using topical references and original research, the book makes a potent contribution to television journalism studies, and is a necessary point of reference for advanced undergraduates, researchers, and academics in broadcasting, journalism, and media studies.

Introduction
Introducing Television Journalism: Sustaining Its Influence into the Twenty-First Century
'Death of TV News… Much Exaggerated': A Story of Declining Television Audiences but Signs of a Revival?
The Scope of the Book
The Role of News in Television Culture: Current Debates and Practices in Contemporary Journalism
Television and the Public Sphere: Journalism in a Multi-Channel Environment
Scheduling Wars: Locating Television News in an Increasingly Entertainment-Based Medium
(Re)Shaping Television Journalism: Public and Commercial Models of Broadcasting
Changing Times, Changing Values: Television News's Shifting Values and Conventions
Towards a Post-Broadcasting Culture? Television News and Media Convergence
HISTORY AND CONTEXT
From Radio to Television: Making Sense of Broadcasting History
The Birth of Broadcasting: Creating National Broadcast Ecologies
Making Sense of Television: Reshaping News Journalism
Deregulating Broadcast Structures: Towards a Commercial News Environment
TRENDS IN TELEVISION JOURNALISM
Redefining What's Newsworthy: Towards 24-Hour News Values and Conventions?
News values: what makes television journalism distinctive?
The Arrival and Impact of 24-Hour News Channels: Three Phases of Global Television Journalism
Live, Rolling News Drama: Empirical Endeavours into 24-Hour News Conventions
Interrupting the News for what Purpose? Exposing the Myth of Breaking News
The Systemic Impact of Rolling News Journalism: Towards 24-Hour News Values and Audience Expectations?
The Rise of Partisan News Consumption: Towards a Polarization of Television Journalism and Audiences?
Network News in Retreat: A New Era of Political Journalism?
News Audiences Go Political: Which Television Channels Are People Watching and Why?
Letting the Fox off the Leash: The Relaxation of the Fairness Doctrine and the 'Foxification' of Television News
Redefining Political News Journalism: Blurring the Lines between News and Comedy
Making Sense of Comedy News: Scholarly Readings into 'Popular' Political Programming
Keeping the Fox on a Leash: Towards the Polarisation of News Audiences beyond the US?
Reporting the Politics of Devolved Nations: Towards More Localized Television News?
Localised News, National Media: Sustaining Journalism Locally
Four Nations, One Union: Devolving Politics without Devolving National Media Ecologies
Reflecting the Four Nations? The King Report and Television Coverage of Devolved Politics
Market Deficit, Public Service Requirement: The BBC Trust and the Impact of Interventionist Regulation
Challenging 'Light-Touch' Orthodoxy: Towards more Evidence-Driven Interventionist Re-Regulation
JOURNALISTS AND SCHOLARS
Entering the Profession: Who Are Television Journalists?
Who Are Television Journalists: A Professional or Occupational Pursuit?
A Face for Television? Gender and Ethnic Minority Status amongst Journalists
Educating or Training? Towards an Increasingly Middle-Class Graduate-Led Occupation
Distinguishing between News Sources: Which Journalists and Journalism Do Audiences Trust?
Putting Television News Centre Stage: The Past, Present and Future Shape of Journalism Scholarship£
Introduction: Studying 'Journalism'
Television Journalism Scholarship: The Formative Years
(Re)prioritising 'Old' above 'New' Media: Why Online Journalism Is Punching above Its Democratic Weight
New Directions in Television News Studies: The Future of Journalism Studies

Stephen Cushion has done a great service by writing this sweeping, timely and provocative volume on television journalism. Cushion has devoured the relevant literature on journalism with the rabid intensity of a starving wolf left alone in a meat market. With tight focus and superb organization, Cushion has produced a remarkably coherent book that covers every important topic in the field today. Television Journalism is going to be mandatory reading for students, journalists, policymakers and scholars going forward
Robert W. McChesney
University of Illinois at Urbana-Champaign

Amidst the glut of studies on new media and the news, the enduring medium of television finally gets the attention it deserves. Cushion brings television news back into perfect focus in a book that offers historical depth, geographical breadth, empirical analysis and above all, political significance. Through an interrogation of the dynamics of and relations between regulation, ownership, the working practices of journalism and the news audience, Cushion makes a clear case for why and how television news should be firmly positioned in the public interest. It should be required reading for anyone concerned with news and journalism
Natalie Fenton
Professor of Media and Communications, Goldsmiths

This is a wide-ranging and informative comparison of television journalism and news in the United Kingdom and the United States. It includes valuable information from both countries on the role of TV news in television culture, the history of radio and television, the development of TV news, the changing political and economic environments for TV journalism, changing news values, profiles and studies of TV journalists, and new directions for TV journalism in the coming years. It also includes numerous tables on TV audiences, journalists' salaries, ethnic minorities in TV journalism, media journals, and top news web sites, as well as an extensive bibliography of papers, articles, and books about TV news. It is the most comprehensive and informative book on this subject that I have seen to date
David H. Weaver
Distinguished Professor and Roy W. Howard Research Professor, School of Journalism, Indiana University-Bloomington U.S.A

Writing about media in the 21st century can be compared to photographing a football match while riding a carousel: both the target and the ground are moving. Steven Cushion's extensive effort to pin down the relevance of television news in the new media environment therefore is a commendable achievement. Television Journalism (part of the SAGE series Journalism Studies: Key Texts) provides readers with a detailed and valuable empirical portrait of an industry in transition... Television Journalism delivers, quite completely, on what it promises: an in-depth examination of its subject's history and political economy, the education of its practitioner, and the medium's 21st-century challenges. For readers in need of a broad picture of television news internationally, its history, regulation and tine, Television Journalism proves invaluable. This carefully crafted, empirical work provides its readers with a solid, large-scale view of television news and its role in democracy. By staying 'wide', as photographers say and working with the big picture, Cushion has managed to hit his moving target while riding the carousel that is today's media environment.
Mary Angela Bock
Journalism

This excellent text draws upon a wide range of empirical research to provide a comprehensive exploration of the world of TV journalism.

This is a very useful textbook that has been adopted for my Level 2 and 3 undergraduate modules that deal with journalism and ethics. It also features a helpful chapter in which the journal based research of Lewis and Cushion from 2005-present is summarised - great news for the student who struggles with Athens account research. Library orders have already been placed and received.

For students interested in an up-to date insight into the making of the broadcast television journalism profession today. As the MA course I am teaching ("Journalistic Methods) is more broad, I recommend the book to those keen on TV journalism particularly.

An excellent and timely addition to an under-theorised field

The Basics of Media Writing

A Handbook of Journalism

Issues in News and Reporting