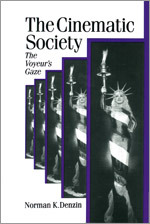 Share
Series:
Published in association with Theory, Culture & Society
June 1995 | 256 pages | SAGE Publications Ltd
Download flyer
"His discussions of the films are always interesting. . . . Denzin's book is in the forefront of the movement that, following the pioneering work of the feminists, takes cinema studies increasingly toward the political. --W. A. Vincent in Choice "Cinema not only created the spectator in its own eye; it created what the eye of the spectator would see. . . . That is really the starting point of Professor Denzin's enthralling examination of the evolution of the aesthetic of the voyeur's gaze in cinema, which began with the Peeping Tom films of the 1900s. . . and presently washes through the minds of western audiences. [Focusing on Foucault] Norman K. Denzin's scholarly book puts together an account of the voyeur's career through the history of cinema, explicating it film by film and genre by genre." --Sociology Written by one of America's leading commentators in the sociology of culture, this assured and timely volume contends that the cinema has increased the tendency toward voyeurism in society. Drawing on the work of Foucault, Norman K. Denzin asserts that the cinematic gaze reflects the machinery of surveillance and power that regulates social behavior in contemporary society. The cinema makes its key players voyeurs who spy on the lives of others, but it also turns the audience into voyeurs who eagerly follow the lives of screen characters as if they were real. The effect of the cinema in the social construction of everyday life has rarely been explored with such penetration and clarity. Surveying an extraordinary array of material from film and film literature, Denzin's work is both methodologically sophisticated and theoretically provocative. A perfect resource for students of social theory and film and cultural studies; this ingenious book offers provocative reading for a vast interdisciplinary audience.
Introduction
The Birth of the Cinematic Society
The Voyeur's Desire
The Comic Voyeur's Gaze
The Asian Eye
Charlie Chan and Mr Moto Go to the Movies
Flawed Visions
The Obsessive Male Gaze
Women at the Keyhole
Fatal Female Visions
Paranoia and the Erotics of Power
The Voyeur's Future

`If in The Cinematic Society, Norman Denzin successfully turns film criticism into a criticism of the human sciences, it is because The Cinematic Society takes as its frame of reference those movies in which the voyeur is the prominent figure - movies which Denzin suggests constitute a "reflexive cinema".... Thus while [the book] may seem to some only to be a book of movie reviews, it is a profoundly important piece of sociology precisely in the way it draws on relexive cinema to make a case for a reflexive postmodern sociology. This is not to say that the readings of the various movies are not themselves of interest; indeed they provide the clues for realizing that ours is no longer a cinematic society. The many mechanical devices that appear in these movies and that provide the context in which voyeurism becomes reflexive, point to the coming to dominance of telecommunication that not only poses profound changes in sociology - changes that must bring sociology even beyond the reflexive voyeurism of much postmodern ethnography. Denzin's singular effort to make sociologists attend to the relationship of sociology and the mass media find their clearest expression in The Cinematic Society, the best of his most recent works. Indeed, this is a book that should be worked with, worked through, because it provides a guide to the future of sociology' - Symbolic Interaction

`Professor Denzin's enthralling examination of the evolution of the aesthetic of the voyeur's gaze in cinema, which began with the Peeping Tom films of the 1900's and continues with sex lies and videotape, Silence of the Lambs and the proto-pornographic wave which presently washes through the minds of Western audiences.... Denzin's scholarly book puts together an account of that voyeur's career through a century of cinema, explicating it film by film and genre by genre' - InterMedia

`Adopting as a central premise the notion that the constitution of subjectivity occurs through the gaze of the Other, and locating the voyeur as the anti-hero of cinematic society, Denzin enters into a brilliant analysis of multiple forms of the voyeur's gaze' - Peter McLaren, University of California, Los Angeles

The SAGE Handbook of Film Studies