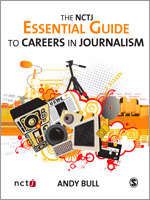 Share
August 2007 | 288 pages | SAGE Publications Ltd
Download flyer
Journalism is one of the most attractive careers, and one of the most competitive. Each year, many thousands of people try to make it as a journalist – and many fail.

Just getting in a good journalism course can be tough, and finding your first job can be even tougher. This book shows you how to succeed.

The National Council for the Training of Journalists knows more than anyone about how to get the qualifications you need, and find the job that is right for you. The NCTJ Guide to Careers in Journalism is your essential guide.

Author Andy Bull tells you all you need to know about becoming a journalist on a newspaper or magazine, on radio and television, or online. In this handy reference he examines what journalism is all about; how to pick the branch of the trade that is right for you; how to choose an NCTJ-accredited training course that will suit you and your individual goals; and how to ensure your career develops along the right tracks.

Issues in News and Reporting

Writing News for TV and Radio

Publish or Perish - The Educator's Imperative